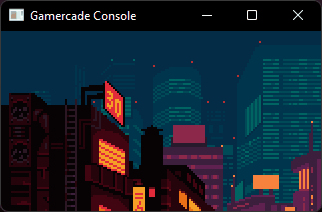 After over half a year in development, we are happy to announce Gamercade 0.1.0!

Gamercade, at its core, is a neo-retro Fantasy Console that runs WASM games. But it's also a bit more than just that.

The main features of Gamercade are:

Imagine you are a small team or solo developer, and you want to make a multiplayer game. Here are some of the common issues you need to face in order to have a successful project:

With Gamercade, the first three requirements are removed. This creates a more modern development environment which lets game developers do what they do best: Make exciting games!

Every feature and function of Gamercade and its related tools are built with the goals of achieving the following:

The console is the first of three applications as part of the Gamercade suit of tools. It's primary purpose is to play awesome games! It does have a few interesting features both for players and developers.

Learn more about the console specs and features here

The standard Gamercade controller is similar to any modern game controller. It features:

Each palette supports up to 64 colors, including alpha on/off. Each game can support up to 256 color palettes, giving a possible total of 16,384 unique, user-definable colors. Sprites can be drawn using any palette.

Gamercade has a simple and familiar tracker-like audio interface. The console supports up to 8 channels of audio, and an additional 8 channels for background music. Each of these channels are synthesized by the console, live, at runtime. Sounds and music are generated from a number of different, fully customizable, instrument types, such as a wavetable synthesizer, an FM synthesizer, or a sampler.

Since Gamercade gams are built from WASM code, there are many different programming languages you can use. We have compiled a list of popular game development and WASM languages, and included both sample projects and bindings to the Gamercade Api as well.

Of course, if you'd like to work with the raw api itself or develop your own bindings, we have fully documented the api here.

The editor is the second application from Gamercade. It is responsible for organization, creation, and editing of all assets used by the games. This includes things like setting up palettes and sprite sheets, but also creating instruments, songs, and sound effects for the games.

All in-progress games are saved in a source-control friendly format. You can open, save, and share your works freely and confidently.

The Editor is also responsible for bundling and exporting games into the format usable by the console. Learn more about the editor here 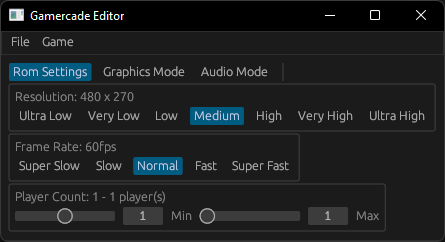 Adjust settings about the game itself and console configuration. Set the games graphical resolution, tweak the resolution, and define the player count for the game. All done via an easy-to-use graphical user interface. 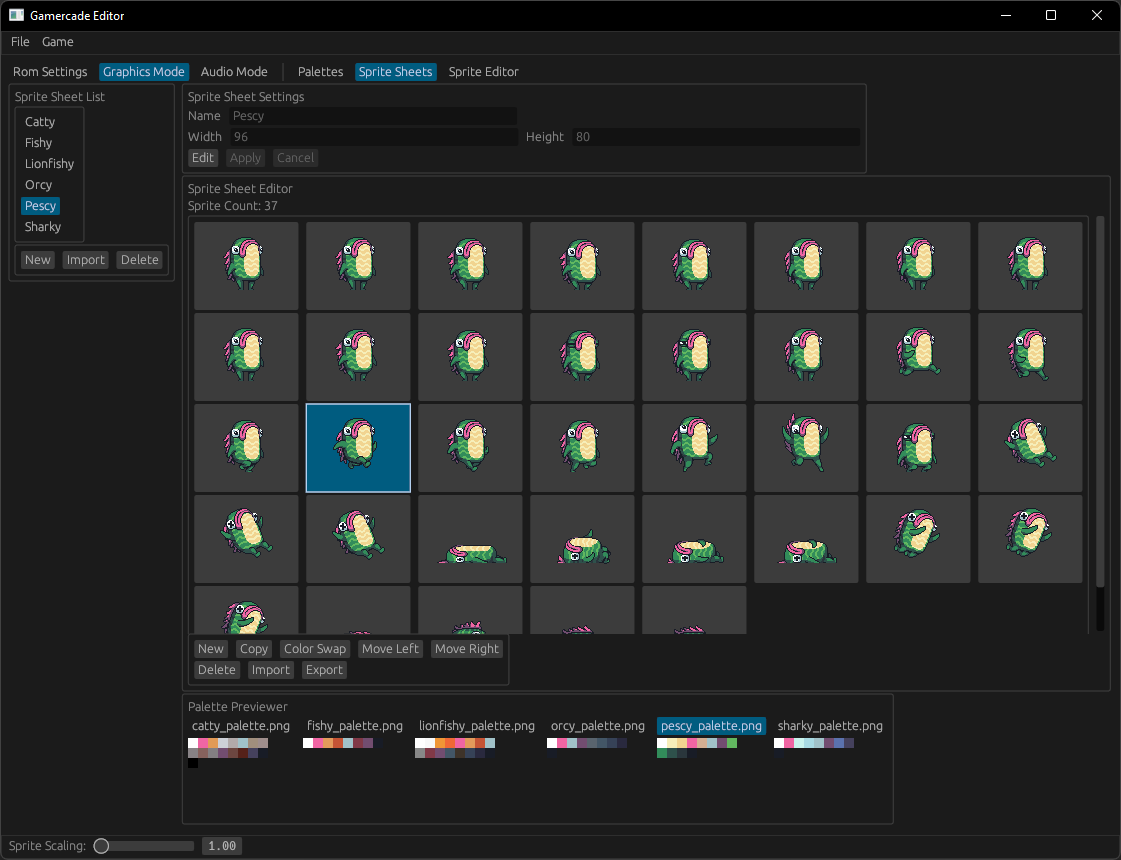 The graphics editor is responsible for all palettes, sprites, and sprite sheets in your Gamercade games. Create sprites in whatever application or workflow you wish. Then, import them into your games using the included tools.

The Audio Editor is responsible for all sound related things in your Gamercade Games! All instruments, background music, and sound effects, are created and modified here. But here's an example to listen to instead:

The sound engine produces all of the sounds via instruments. Think of them as a source of sound, rather than a musical instrument. Instruments can be triggered on and off, and also be set to play at specific frequencies. This can be done via game code, or by triggering songs or sfx, which playback a predetermined series of chains and phrases. 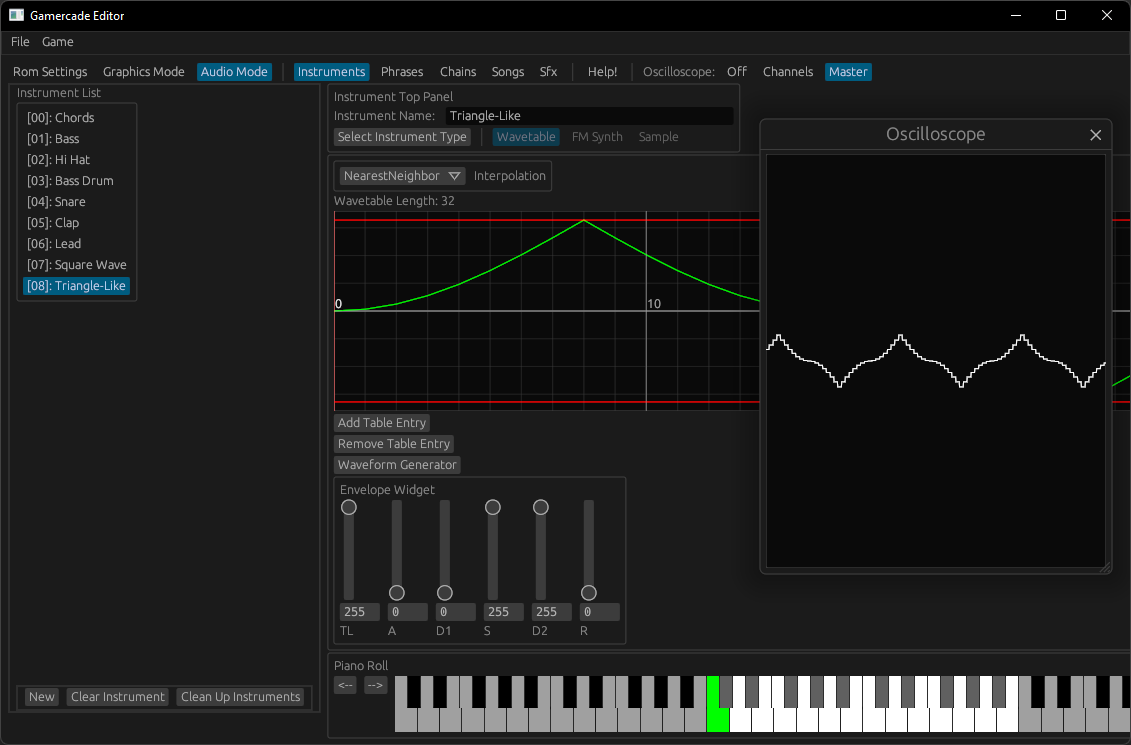 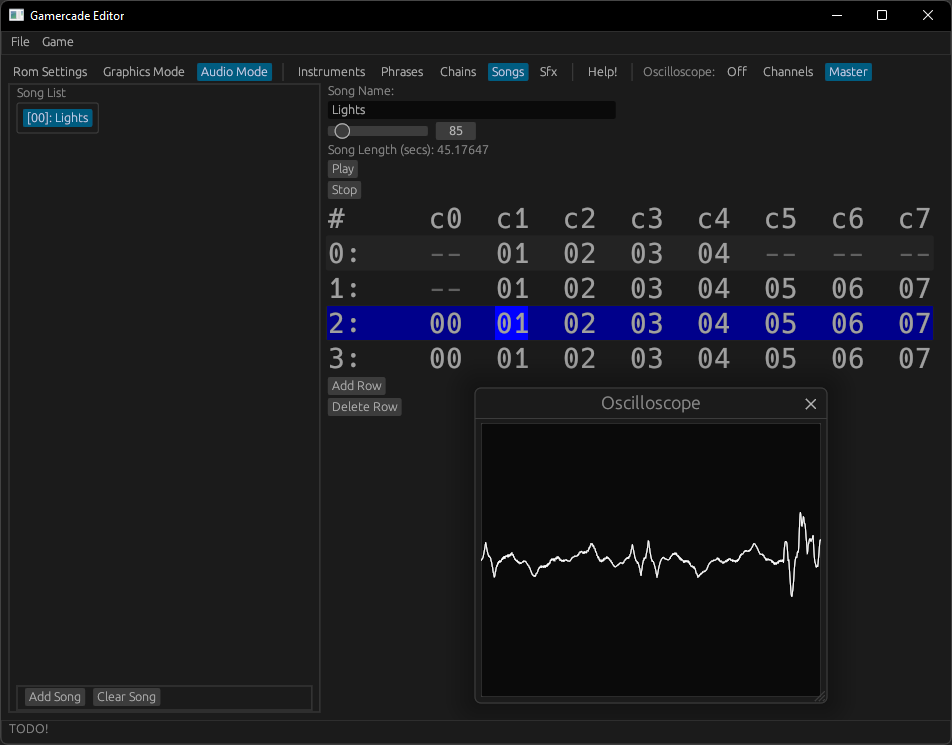 The tracker editor modes are responsible for defining the playable sequences in your games. All songs and sfx are composed of a series of chains and phrases, which are a series of note frequencies and the instruments that play them.

Each of the tracker modes features a similar interface: multiple rows with spaces for data entry. The track will always flow from top to bottom, playing any of the entries (if they exist) in sequence. They will continue to play until they are finished by reaching the end of the sequence.

The third and final tool is GamerCade Command Line Interface, also known as gccl. This provides a collection of use scripts and tools for working within the Gamercade ecosystem. It's especially useful for developers who want a fast cycle of edit-build-test for their games. Learn more about the gccl here

The primary use for gccl is being able to export and bundle games via the command line. This is much faster than the methods using the editor to export the game files. By using gccl bundle and providing arguments to the path of the code, assets, and output files, users can quickly and easily bundle their games for rapid development.

gccl can also be used to run the console. This is invaluable when paired with the concept of bundling above. Users can execute commands like gccl console rom [PATH TO ROM] to automatically launch the console and run the game at that desired path.

By using the -w or --watch flag, the gccl can automatically re-run any commands. For example, taking the following command from above gccl -w console rom [PATH TO ROM] will automatically launch the console whenever any file change is detected on the game rom.

Gamercade has come a long way since the beginning. While it has all of the core features ready to go, there is still a bright future ahead. Some of the next features we want to add over the next few months are:

Of course, we are open to suggestions and comments from the community!

If this sounds interesting to you, consider joining the community! Currently, we're mostly active in discord. Gamercade is also completely open source and open for contributions and suggestions. We'd love to hear about all the cool stuff you're building.

Head on over to our downloads page to get the latest release.

Learn more about Gamercade on our official documentation page.

If you want to start coding right away, check out our examples or read about the api.